Corban Building in Dean Street sells at auction for $1.51 million 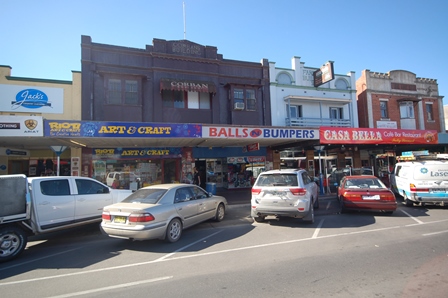 THE two-storey Corban Building in central Albury has changed hands for the first time in its 84-year history.

Established in 1931 by its Lebanese owners, the property has been sold at auction for $1.51 million.

Another Lebanese family, the Farrahs, built a similar property in Dean Street a year earlier.

The Corban Building auction conducted by L.J. Colquhoun Dixon commercial real estate agents was sold to an undisclosed local buyer who had a representative bidding for him.

The successful buyer fought off three other bidders to underline the traditional interest in Dean Street properties.

Agent Scott Mann said the result was above expectations.

“It was a pretty strong result,” he said.

“We had some very strong enquiry during the marketing campaign for the property.

“It is fairly standard for this time of the year.”

The combined net rental return for the three Corban Building properties is about $116,000 per annum.

The earliest recorded Lebanese visitors to Albury were hawkers moving through rural areas of Victoria and NSW selling wares and using the Murray River as a watering spot for their horses.

They were followed by small business people from Melbourne in the drapery, manchester and clothing fields.

The Abikhair family initially moved to Albury in the late 1800s before establishing a large building in the 1920s on the corner of Olive and Swifts streets.

Lebanese settlers initially lived in the poorest parts of Albury and in some instances in tents and humpies.