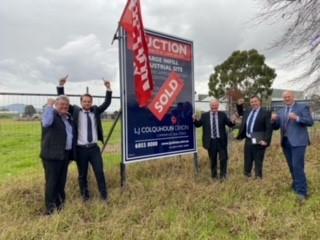 A 20,000-square-metre block not far from the Albury CBD went under the hammer on Friday and fetched $3.1 million after a hard-fought battle.

LJ Colquhoun Dixon director Andrew Dixon said more than 30 people were curious about how much the industrial site at 190 North Street would draw.

Mr Dixon said the site was owned by brothers Ivan and Marko Jakovac who are Albury locals.

“The site is quite large – 20,000 square metres which is about five acres,” Mr Dixon said.

“The owners had held on to it for about 20 years.

“They run a storage business and may well have been planning to set up a similar business there but I believe they kept an open mind about it.”

Mr Dixon said that after this long period of inactivity, “in the end they had a change of heart and decided to sell it”.

“They were very happy with the result,” Mr Dixon said.

“There was very strong bidding at the onsite auction with dozens turning up to have a look.”

He said the buyer wanted to keep a low profile and would prefer not be named.

“I think the buyer is keeping an open mind on what to do with it,” Mr Dixon said.

“He runs a business elsewhere in town so he may well move his existing business to there.

“It is an industrial site so if someone wanted to do something special with it, that is run a commercial business or something like that, they would have to approach the Albury Council for approval to have it rezoned.

“If you wanted to run, for example a used car lot, you would have to go through the channels with the council for approval.”