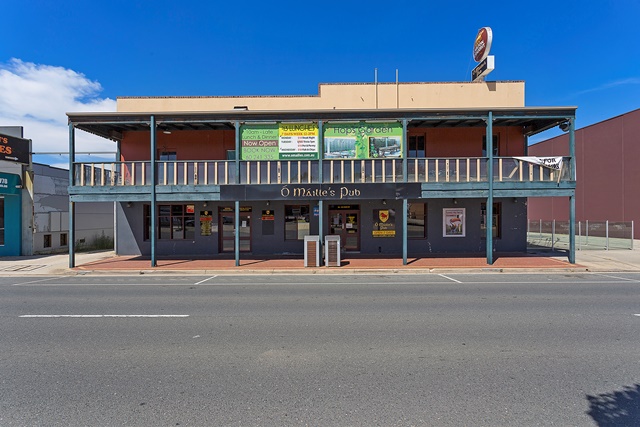 A hole in the heart of High Street in Wodonga is set to be filled with the sale of O’Maille’s Pub.

L.J. Colquhoun Dixon agent Scott Mann said the new owners were a couple who were in the hospitality business in Melbourne.

“It’s a husband wife team – the wife is originally from Wodonga,” he said.

“They had recently let go another asset and were looking for something new.

Mr Mann said they had purchased O’Maille’s for “close to $700,000” with an intention to rejuvenate the pub’s heritage.

“Their proposal has always been to utilise the existing building,” he said.

“With a bit of hard work, they can see the opportunity to get it up and running again.

“It’s certainly a good result for High Street – there’s been a lot of unknowns with the CBD of Wodonga.

“It’s good to have a result that means there is going to be an occupier of a place that takes up a big crack of property.”

The well-known pub had been on the market since April.

“The closure of O’Mallie’s disappointed the market, especially those who attended its regular music events,” she said.

“It was a local venue with a unique appeal at the time of opening, it was a fresh option, and one that encouraged patrons to visit from both sides of the Border.

“Having a venue or any business close, and remain closed for such an extended period of time, can be discouraging to business in the immediate vicinity, especially if things are quiet.”

Ms Leach said the business scene in Wodonga was changing and the news O’Maille’s could be up and running again in the near future was positive.

“In the last 12 months, we have seen a few changes down this end, new businesses opening, businesses reinvigorating their premises and existing Wodonga businesses shifting to the area,” she said.

“The re-opening will hopefully become a draw-card for those in the area to utilise the offering, whatever it may be, and we hope this is in the not-too-distant future.”