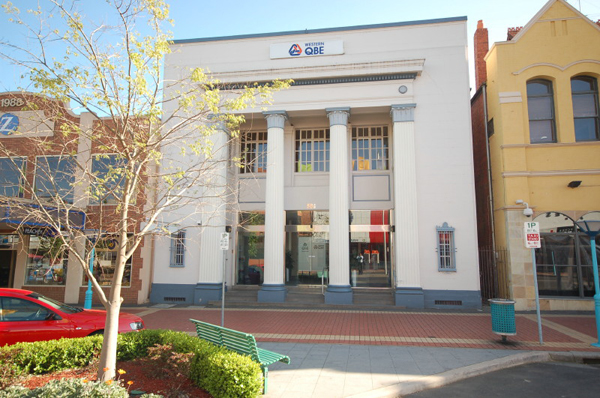 THE former Commonwealth Bank building in Dean Street has been given a major makeover in preparation for Pacific Brands opening its doors in Albury next week.

The heritage-listed building has been returned to its former glory with a mix of heritage colours.

The work has been matched by an internal overhaul including the installation of a new disabled access ramp.

Pacific Brands has signed a five-year lease with the building’s owner, Geoff Wright, for a Bonds Outlet store.

Mr Wright purchased the former bank building at 588 Dean Street about 10 years ago with the top floor former bank manager’s residence being the headquarters of his KFC franchise.

The bank was built in 1929 with its trademark four fluted columns.

Mr Wright said he was approached by Pacific Brands about the colour scheme it wanted to rekindle the building’s heritage aspect.

“They are all heritage colours which were obviously submitted to the council and to us for approval,” Mr Wright said.

“Bonds went to a lot of trouble before arriving at the finished product.

“They are not necessarily their corporate colours but they really wanted to bring out the heritage side of the building.”

The building has been vacant for 18 months.

A six-figure makeover has been completed in two stages by local building firm Modem Construction.

Mr Wright said the works included installing a new suspended ceiling with the original ceiling being badly damaged over the years.

“There was a lot of cornice missing and a lot of plaster was cracked and broken,” he said.

“There just wasn’t the time to go back to that original ceiling height.”

The paint job was carried out by Carters Painting Decor.

Meanwhile, the former Fletcher Jones shop at 583A Dean Street has been leased to a women’s fashion retailer.

Swish which will open early next year, adding to more than 100 stores in Australia and New Zealand.