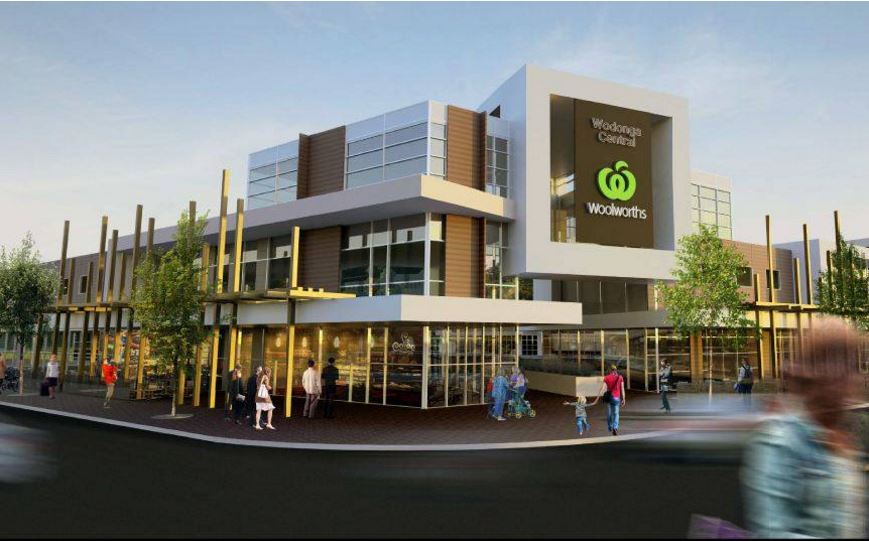 WOOLWORTHS have revealed for the first time an image of what a $20 million redevelopment of a prominent corner of the Wodonga central business area will look like when complete.

Vacant land created by the re-alignment of Elgin Boulevard land presently occupied by the existing supermarket carpark will be transformed with two-storey street frontage which will accommodate the ground level retail and first level offices.

Parking for 180-plus cars will sit behind the retail with multiple pedestrian access points also to be created.

Woolworths have confirmed construction will start mid-year, but have not confirmed a builder.

“We are delighted our development proposal for an upgraded 4000 square metre full-line Woolworths supermarket and key shopping destination in Wodonga has been approved by council,” a Woolworths spokesman said.

“We plan to commence works on the site in July and complete in mid-2017.”

Woolworths also haven’t confirmed how many specialty shops have been let and when the existing supermarket would close.

The central Wodonga supermarket will be bigger than Woolworths’ store in Whitebox Rise.

The existing Safeway supermarket was built in 1977.

Woolworths bought the land created by the Elgin Boulevard re-alignment from Wodonga Council which agreed to a land swap with Places Victoria which is developing the neighbouring Junction Place.

“The Woolworths investment in our central business area is testament to the confidence in our growing city and the investment all levels of government along with the private sector in our city, is already worth more than $80 million over recent years not including the present developments,” she said.

“Our community has told us it wanted a vibrant city centre and with work beginning on this site, as well as the investment indicated for Junction Place, we will see another transformation of our central business area.”

The council confirmed modified plans for the nearby Mann shopping centre development was still under consideration.

Coles and Kmart will be the anchor tenants in the Mann development which will include 10 to 15 specialty shops.